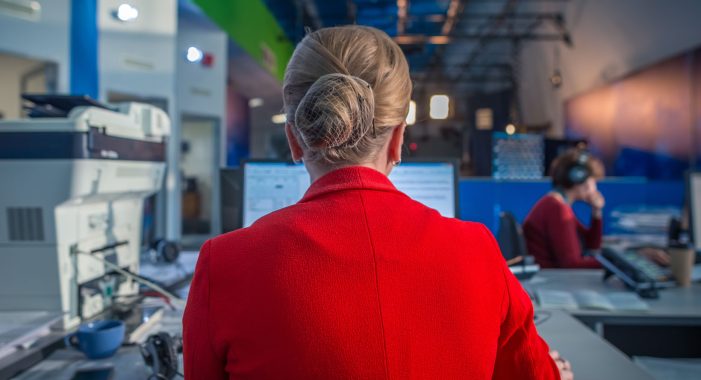 A screengrab of a woman appearing on the main news programme of Russian state-run Channel One with a poster saying “No war” had overflown both social and mainstream media. The story became an international sensation; however, concerns were raised about the credibility of Marina Ovsyannikova – is it a case of a propagandist turning into an activist, or a carefully planned information operation?

This case study was written by Iveta Siniūtė and Fabio Belafatti of DebunkEU.org.
First published October 10, 2022 | Republished here with permission.

On March 14, a couple of weeks after the Russian invasion of Ukraine, Russian journalist Marina Ovsyannikova appeared live on Russian state-run Channel One holding a poster saying “No war. Stop the war. Don’t believe the propoganda. They are lying to you here.  Russians against war.” 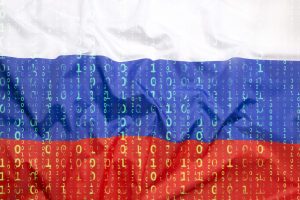 Her protest, performed in the studio of one of the biggest Russian state propaganda channels, attracted both domestic and foreign attention: some praised her courage and offered political asylum, while others expressed doubt about her motives and accused her of being a form of well-planned and sophisticated Kremlin’s propaganda stunt, useful to distract audiences as Russia was unfolding its worst violence against Mariupol during the same days.

Marina continues to present herself as an opposition figure in frequent interviews with Western media and has successfully garnered the support and sympathies of many in Europe, notably in Italy and France. Marina even managed to land a job at a prominent Western media outlet and was awarded the Vaclav Havel Prize for Creative Dissent. Her supporters see her as a former propagandist who could no longer stand the scope of Russian propaganda once the full-scale war started. 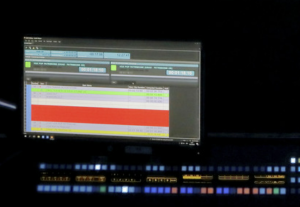 Despite all of this, multiple aspects of the story lack coherence, and her tale remains shrouded in a cloud of suspicion. Why?

The first suspicious aspect is Ovsyannikova ’s ability to escape severe punishment: upon her arrest right after appearing on live TV, Marina claimed to risk criminal charges and a jail sentence up to 15 years. However, she was released after 14 hours of interrogation with a comparatively modest fine of 30 000 rubles (around 200 euros at that time).

Marina claims that only attention from the Ukrainian president Volodymyr Zelenskyy and his French counterpart Emmanuel Macron saved her from criminal charges. This, however, seems unlikely given how many Kremlin critics have suffered far more serious consequences despite being widely popular and recognized abroad, as is the case with Alexey Navalny.

Extremely light punishments are even harder to ignore when they keep repeating. When Marina Ovsyannikova decided (or ‘was forced’ in her own words) to return to Russia at the beginning of July, she expressed fears of being arrested at the airport upon landing.

This, however, did not happen, and in mid-July she even organized a single-person’s protest in front of the Ministry of Defense of the Russian Federation, right across the river from the Kremlin.

The single-person protest format raises issues with Ovsyannikova’s story’s consistency. In many of her interviews, she claimed that the Russian public is overwhelmingly opposed to the war. Yet, nobody joined the protest alongside her: This would either suggest that her assessment was incorrect (at best) or insincere (at worst), and that the public is in fact in favour of the war, or that the protest was safely staged by Russian authorities to revamp media attention and maintain the image of Russia as a country that tolerates dissent, all while ensuring that she would not be joined by others. What is certainly unlikely is that she could have showed up to protest without authorities knowing, given the high level of surveillance to which opposition figures are subject in Russia.

Marina’s mid-July protest and media activity led to another arrest, a short detention, her home being raided, and the opening of an administrative court trial, all of which made headlines in Western media.

She was arrested again both in July and August and found guilty of spreading ‘disinformation’ and ‘discrediting Russia’s armed forces’. She was given an administrative fine of 50 000 rubles (around 800 euros at that time) and two months of house arrest for a crime that can lead to up to 10 years of imprisonment. This further reinforces the suspicion that the Russian regime is taking advantage of Western media’s attention for Marina’s story.

“Russians are victims, too”

Suspiciously low punishments are not the only strange thing about Marina Ovsyannikova’s story. The other one has to do with her message. 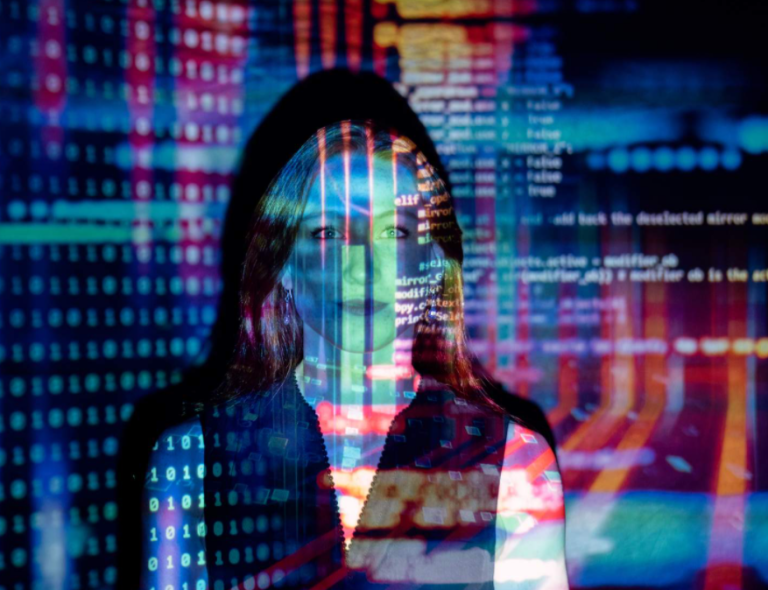 Marina started her oppositionist career as an anti-war advocate. However, it did not take long before she started advocating for the Russian public, suffering – according to her – from the sanctions imposed by Western governments against what she calls ‘Putin’s war, not Russian people’s war’ (sic). Back in her early interview with the Italian state TV, Ovsyannikova expressed the opinion that ‘today there are many Russians who suffer alongside Ukrainians’, and in a later statement she revealed how her own daughter became a victim of sanctions when the girl’s credit card was declined at her school’s cafeteria, leaving the girl ‘starving’.

This kind of examples, ‘showing’ that Ukrainians are not the only ones suffering, raised deep exasperation among witnesses of the tragedy ongoing in Ukraine, leading some Ukrainian scholars and activists to question the shaky ground of her moral equivalences and asking how this could possibly be compared with the war crimes committed in Ukraine by Russia.

When her narrative asking to lift sanctions resulted in her being called a Russian spy, Marina started accusing Ukrainians by doubling-down on the moral equivalences and asking ‘Which prison should I go to? […] Russian or Ukrainian?’. This failure of hers to understand how hard it is to trust someone who had been working for a hostile country’s propaganda machine throughout all the years of Russian aggression suggests either that she is insincere or, at the very least, that she lacks the sensitivity needed to really understand the issue and advance peace’s cause.

And this is, ultimately, the key issue: Marina’s popularity in the West helps her not only spread the idea of ordinary Russians being victims, in the process building unjustified moral equivalences and distracting attention from events in Ukraine, such as when she made media headlines as Russia was carrying out mass-scale war crimes in Mariupol. It also has the effect of sidelining Ukrainian voices.

Every publicity opportunity given to Ovsyannikova has an opportunity cost, in the form of a Ukrainian activist or expert not being heard out. Ukrainians being deprived of a platform to speak up at such a crucial time in favour of a former (?) spokesperson of an aggressor power carries strong colonial connotations, as yet another example of silencing of local voices and of the Western practice of “reading” events on the ground exclusively through the more recognizable perspective of those who already hold power.

The Russian invasion of Ukraine has been accompanied by other prominent instances of this colonial tendency to condescendingly silence local voices, as if Ukrainians were inherently unable to tell their own story. Marina Ovsyannikova’s presence on the global media further strengthens this message.

Her stunts also help those in the West who advocated for engagement with Russia despite many warnings from Eastern European countries, diplomats and politicians that the country could not yet be trusted, as its politicians and much of its society never accepted the fact that its former domains had liberated themselves. Ovsyannikova message that this is ‘Putin’s war, not Russian people’s war’ helps Westerners avoid asking themselves uncomfortable questions on the role that Russian society, or at least parts of it, might have played in cheering the war effort on since 2014.

Ukrainians’ stance towards Marina Ovsyannikova’s efforts has been expressed quite clearly. Back in March, a group of Ukrainian activists led by scholar Ivan Kozachenko organized a petition against Marina’s appearance on Western media, noting how ‘It is ridiculous, indeed offensive, to expect from her any balanced input on Russia and, especially, Ukraine,’ given how she has ‘no record of either pro-democracy activism or balanced journalism’, and played a role in spreading of some of the most ridiculous smear campaigns against Ukraine. Later, a press conference in Kyiv featuring Ovsyannikova was cancelled due to public outrage.

These objections are meaningful, especially as they come from those who are directly enduring the Russian aggression and should arguably be prioritized on Western media outlets over Marina’s claimed anti-war stances.

So, who is she? And does it matter?

No one can say for certain who Ovsyannikova really is or what her goals really are – although the sheer number of inconsistencies and coincidences may be a good hint. But ultimately, the question should be: Does it even matter? The key issue surrounding Marina Ovsyannikova is not what she is or is not saying, but whose voices her presence is silencing: what could (and should) we be hearing instead? In the context of the largest (though not Russia’s first) war of aggression between sovereign, mutually recognized states in Europe since WWII, and the first war of imperial (re)conquest since the process of Decolonization started, listening to local voices to tell their own stories about what is happening to them and why is paramount.

U.S. Advances to Knockout Round With 1-0 Victory Over Iran in Tense Matchup https://www.nytimes.com/live/2022/11/29/sports/usa-iran-world-cup-scores?smid=tw-share

Analysis | What's in store for cybersecurity in Congress's stretch run - The Washington Post https://www.washingtonpost.com/politics/2022/11/29/whats-store-cybersecurity-congresss-stretch-run/ via @GoogleNews